Rose in the HOF 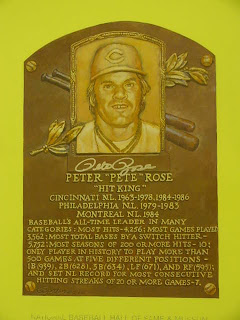 If you're a Rose fan or baseball fan in general you have an opinion on Rose's banned from baseball and through rules changed after the fact the HOF.  Here's my 2 cents on it - do I believe he should be in - without a doubt numbers and record don't lie he left everything on the field and anyone that doesn't recognize that is blind.  Now his gambling is a serious crime and I can see how it was seen when he didn't bet on the Reds to win he was signaling they might not have the best chance of winning but he never pulled a player out or did a bad managerial move to effect the game.  So I truly say time served give him his due.

Now I also believe he will never get reinstated by Selig or any other commissioner that answers to the owners.  There is no plus (money) side to baseball to let this happen.  Baseball seems content to roll Pete out when it suits their needs a.k.a. all time team, memorable moments celebration because dollars were on the line it made baseball money to have him there and made baseball look good.  I do believe that a few years after he passes away then baseball might get around to reviewing his case and let the HOF committee vote him in or not but they seem very scared to let him have the mic and give a speech at inauguration day.  Pete has always put the game first and would never embarrass baseball on its grand stage, so I don't know what they worry about.  It would definitely make money for the hall as I will be there when it happens.
Posted by sschauer at 9:43 PM