In the late 80's counterfeit Rose rookies showed up in mass almost a perfect crime in that not many people thought of counterfeiting baseball cards beside the T-206 rarities and was a very good job. He however tried to sell 100s at 1 show I'm pretty sure not many people own 100 of his rookie yet alone in perfect condition. I have only owned 2 at 1 time and only have 1 now. But the tell tale signs of the 80's counterfeit is if you hold the card up to a strong light looking at the reverse you can see the 4 circles easily, due to paper stock that was too thin it also has a waxy feeling to them. Also the phony Rose's have a black outline around his cap that is not visible in the real deal. Also there is a white dot below McMullen's cap above his left eye. 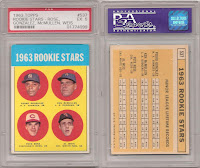 I'm a firm believer there are even better copies out there now and even worse ones than the first that is why I would never buy a raw rookie. Even though I dislike grading cards, makes people go for the grade rather than the card, for a high dollar card better safe than sorry and get one that has been thoroughly examined. The typical Rose rookie is very tough to get in 100% centered conditioned so that is the 1st red flag not that they don't exist but very very rare.