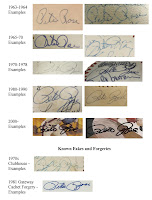 Pete's autograph has been a pretty stable one over the years but there are differences from when he was a unknown (relatively) rookie to superstar of the 70's and 80's. Below are some examples to show the transformation. His early signature was very rigid no big loops 63-64 style. As he stayed in the league longer and became more popular his autograph changed both for speed and style the P and R became round 65-70. The 70's sigs are much bigger and P and R more oval this seems to hold true to today although as time progressed the oval has become longer. His current signature for "certified" issues has squashed down a bit most likely do to space on the sticker and the fact I'm sure he signs 100s or 1000s of these at a time his hand has to cramp after awhile.

The good news is he is and was a very good signer that seems to be his full time job now so there are not a ton of forgeries out there but there are some from the late 80's that don't match when you really look at the details. And also some earlier signatures but on a newer item just can't happen so always watch for that.
Posted by sschauer at 2:28 PM