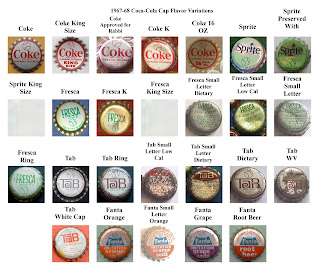 2 more caps to add to the mix Coke 16 Fluid Oz and Sprite with preserved with below baseball.  Always looking for more.
Posted by sschauer at 10:18 AM No comments:

Have a Happy Thanksgiving everyone and enjoy some new scans of some magazines and other niceties.

Just a few new items to add to the ever growing site.

Full Size
Posted by sschauer at 8:28 AM No comments: 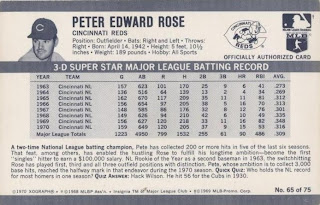 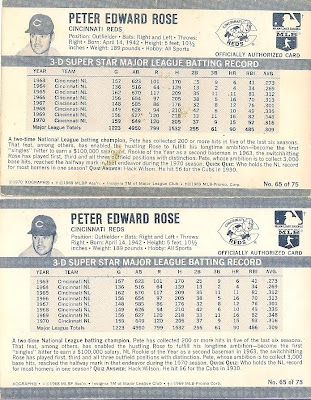 Just wanted to go over the rare stuff it is wildly used in auction titles as rare but is rarely the case.  The rarest Rose items are by far the Topps test issues of the 60s the 67 punch out and 68 disc is easily a mid 4 figure items if and when it ever comes up for auction.  But beside test issues which by their nature are not printed in quantity the 60s regionals are hard to come by the 63-65 burger beer print (I think more because it is not easily identifiable  as such most think its a Jay publishing photo) and the 60s MacGregor's never pop up all that often.

The 70s are pretty plentiful a few I've never seen are the 1970 ihop reds placemat have seen most other teams.  And for some reason have yet to see a 1976 Kellogg's box in over a year of looking they don't come up for sale everyday but seems every other year one will pop up every 3-4 months.

The 80s has some true rarities.  The 81 / 82 MSA FBI disc is very scarce the 81 I've never seen.  The 81 MSA promo disc is another that doesn't seem to ever surface.  Another one is the 79 Phillies postcard this the white stripe at the bottom couldn't tell you how it was issued but the Rose never comes around and have never seen another player pop up either.  Also looking for 1984 Expos postcard with the bilingual trademark line on back starting to believe it is not real but I'm sure it is just in the rare category.  The last item from 80's which I'd think would be plentiful but isn't is the Meadow Gold milk products the were issued during a boom in card collecting so they should pop up but anything beside the pint milk carton is not seen.

Got any others send them in.
Posted by sschauer at 8:38 AM No comments:

Well the new hosting move is done and seems to be fine if there are any errors let me know.  Here are some new items added.

New Stuff
Posted by sschauer at 2:51 PM No comments:

The site might be down a little this week / weekend as I move off dream host and move to godaddy hosting.  It saves me some money and should be more stable and faster.  The forums will probably be down longer as that is more involved.  But it takes a long time to upload 7,146 scans just a hair under 2 gigs of data but hopefully won't be a big issue and some of the weird quarks will go away like the buttons not working for some.  There also will be some minor rearranging and small face lifts happening.
Posted by sschauer at 8:51 AM No comments:

Not the funniest thing ever but Pete seems rather unfazed by any of it.

Bruno Video
Posted by sschauer at 6:03 PM No comments:

I recently won a large lot of Reds Alert magazine/newspaper and compiled the complete list of Rose covers and many many advertisements in them.  The newspaper was produced from 1974-1979 started off in 1974 as Pete Rose's Reds Alert with a small picture of Pete on each cover left them off the list just included the full blown covers of Pete then changed its name to just Reds alert in 1975 and finally changing its name to Sports Alert in 1978.

Complete list of new stuff
Posted by sschauer at 9:39 PM No comments: