Been working on a hostess checklist for awhile now and still not close to finished but wanted to share some quirks of the 76 set and variations.  They were issued on East coast, northeast, and west coast and Rose is known to be on the Twinkies, Cupcakes, and Ho-Hos boxes.  There are 2 semi interesting variations and maybe more the Twinkies boxes on the east coast are 13 oz on the west coast must put more filling in them they are 15 oz.  Another East/West coast variety in general the L panels show up on cupcake boxes on the east coast but the straight 3 panels on the west I've never seen a 76 Rose L panel so this seems to not be for every cupcake box anyone have one?

But onto the real reason there is a picture variation on the Rose and most likely every card as detailed on Bob Lemke's Blog awhile ago.  I broke out and scanned my Twinkies and Ho-Hos box and there in lies the variation.  The Ho-Hos picture is cropped longer the peaks on Cincinnati on the jersey shows 4 peaks both NN I believe.  While on the Twinkies there are only 3 peaks.

A super minor variation that won't set the world on fire but for the Rose collector with everything there's a new thing to go after. 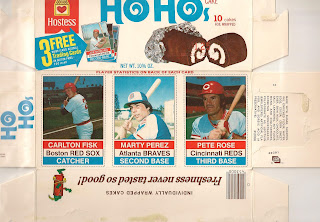 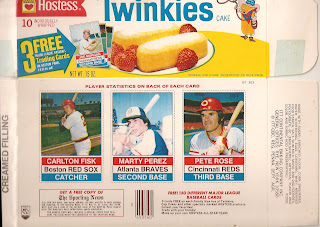 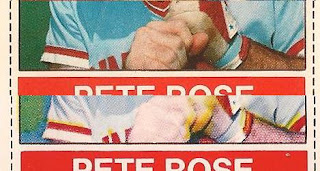